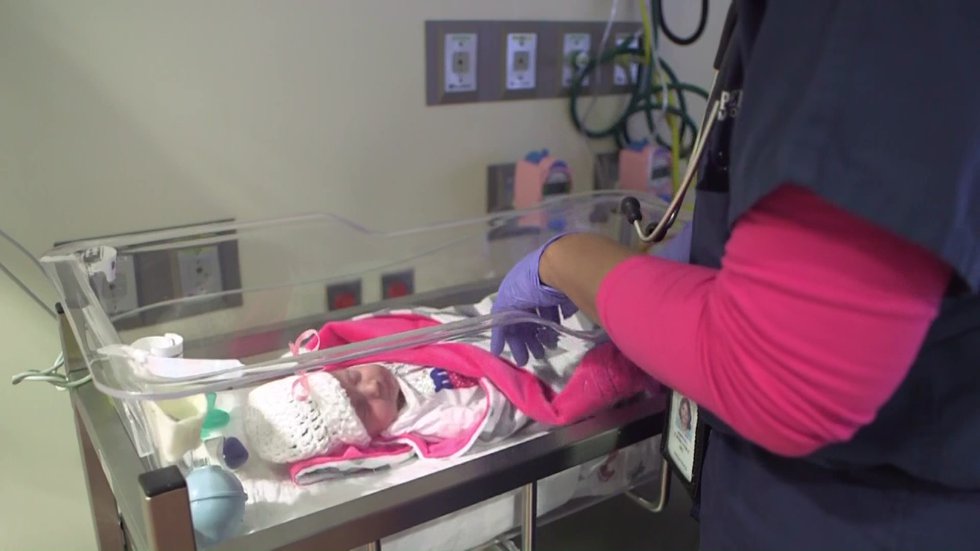 What contributes to the increase in heart defects in babies?

Congenital heart disease is increasingly common in children. So how do you spot one?

According to the Centers for Disease Control and Prevention, about one in 100 babies has a congenital heart defect. It means they were born with a structural problem in their heart.

There are at least 18 types of congenital heart problems, and some of them are becoming more common.

“Certainly we are seeing more patients with suspected congenital heart disease and suspected heart problems because there has been an increase in awareness,” Dr Shubhika Srivastva said.

Another reason for the spike is that doctors are able to detect problems earlier, thanks to better prenatal screening. And what moms-to-be do during pregnancy matters.

Many defects are identified before a baby is born, but if they are not, look for symptoms such as gray or blue skin, rapid breathing, shortness of breath, poor nutrition, poor weight gain or swelling of the legs, belly or around the eyes.

Some heart defects are benign, while others require major, life-saving treatment.

Some congenital heart defects may not be diagnosed until later in childhood or during adolescence. Symptoms in older children may include fainting, extreme shortness of breath, or extreme tiredness during exercise or physical activity. Swelling of the hands, feet, and ankles is another possible sign.

SYMPTOMS AND RISKS: Serious congenital heart defects usually appear shortly after birth or within the first few months of life. Signs and symptoms may include pale gray or blue skin color, rapid breathing, swelling in the legs, abdomen, or areas around the eyes, and even shortness of breath during feedings. If signs and symptoms are evident in older children, they may become short of breath easily during exercise or activity, tire easily during exercise or activity, faint during exercise or activity, or swell the hands, ankles or feet. Most congenital heart defects result from problems early in your child’s heart development, the cause of which is unknown. However, certain environmental and genetic risk factors may play a role. These risk factors include rubella, diabetes, medications, alcohol use during pregnancy, smoking, and heredity. Congenital heart defects are sometimes hereditary and may be associated with a genetic syndrome. Genetic testing can detect such disorders during fetal development. If you already have a child with a congenital heart defect, a genetic counselor can estimate the chances that your next child will have one.

CHD AND EPILEPSY: Children with congenital heart disease have a higher risk of developing epileptic epilepsy well into adulthood, according to a Northwestern Medicine study led by Bradley Marino, MD, MPP, MSCE, professor of pediatrics at the division of cardiology. In the observational study, Marino and a team of collaborators looked at data from more than 15,000 patients born and diagnosed with coronary artery disease between 1980 and 2010 in Denmark. They found that children with coronary artery disease were more than three times more likely to be diagnosed with epilepsy before the age of five, compared to the general population, and more than twice as likely between the ages of 5 and 32​ years. Overall, the incidence of epilepsy in patients with CHD at age 15 was 5 percent. The risk of epilepsy was particularly high in patients who had undergone multiple surgeries for coronary heart disease, although the risk remained comparatively higher even for those born with mild conditions who had not undergone any surgery. The authors suggest that the increased risk may be the result of non-surgical factors, such as a lack of sufficient oxygen due to coronary artery disease that leads to neurodevelopmental changes. There may also be a genetic explanation for the link between coronary heart disease and epilepsy.

2018-07-26
Previous Post: Prenatal screening reduces births with serious heart defects
Next Post: Here’s how heart disease affects men and women differently. Find out if you are at risk | Health