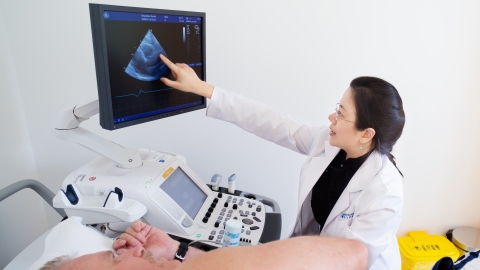 US patient hails Shanghai doctors and service after heart surgery

It turns out that an American patient’s decision to stay in Shanghai for treatment during the resurgence of COVID-19 was right and wise.

The 50-year-old expressed his gratitude to local doctors, who helped arrange his heart surgery in Shanghai as it was difficult for him to return to the United States for treatment due to the COVID pandemic and illness. -19.

The man, who declined to be named, was diagnosed with a significant heart condition during a checkup last year at SinoUnited Health, a private medical facility in Shanghai, and doctors have suggested further checks detailed.

According to the facility’s Dr. Kathy Shi, the patient was diagnosed with mitral valve prolapse, which can cause serious problems like heart failure. She suggested that the patient undergo surgery in time.

The patient initially had concerns about having heart surgery in a foreign country and contacted doctors in the United States. However, air travel problems due to the pandemic and his heart condition made it very difficult for him to return home for treatment.

After consulting Shi several times, he decided to have the surgery in Shanghai. SinoUnited doctors managed to help him contact Shanghai Zhongshan Hospital and accompanied the patient throughout the treatment as translators and consultants.

“The serious imbalance of medical resources in China forces doctors to see a large number of patients every day, especially in the best public hospitals. They probably find it difficult to fully explain the condition of each patient, even if they do When it comes to international patients, it can have a lot of inconveniences due to language barriers,” Shi said.

“Therefore, it is understandable that international patients feel restless or hesitant when seeking medical services in a foreign country.

“Thus, private and international medical institutions play an important role as a bridge between international patients and these public hospitals.”

The operation performed in September was a success and the patient was discharged quickly.

He recently returned to SinoUnited for a post-op checkup and all data showed he was recovering well. The patient said that his doctors in the United States also praised the surgical quality and medical service in Shanghai after reviewing his medical report and knowing the whole treatment process.

He expressed his gratitude to all doctors in Shanghai and said that undergoing major surgery in a foreign country was a big decision, which turned out to be a very sensible and wise decision here in Shanghai.

“Dr. Kathy Shi made a foreign patient comfortable with major surgery. They continue to take the time and patience to ensure that I am well informed and can take the best decisions,” the patient said.

“I think the service in Shanghai is comparable to most medical service providers I have experience with in the United States.”