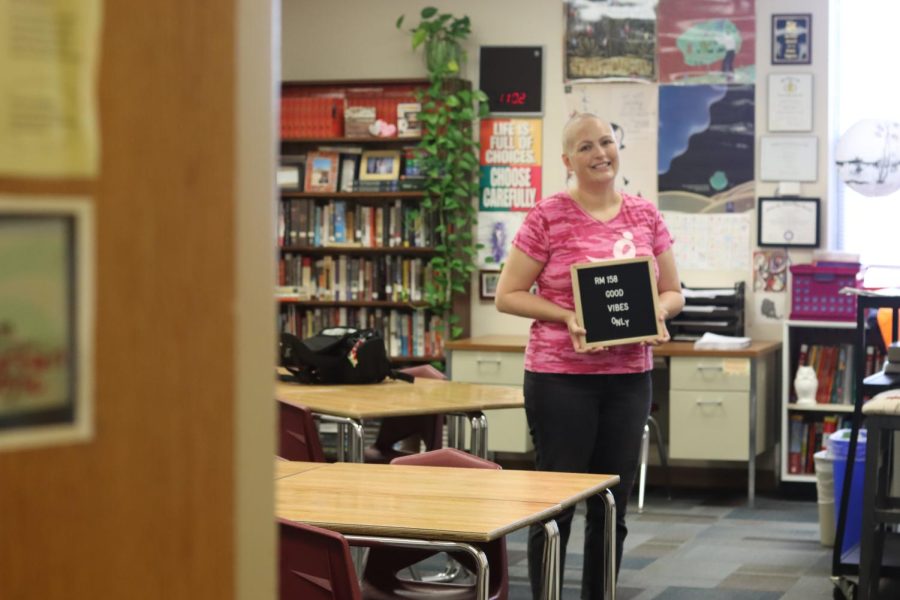 The Throwing Food | More than a diagnosis

â€œI became the person I was afraid of. The number one cause of cancer is having had cancer before. I knew I would get cancer again later in life. I just didn’t expect this to happen again, â€said Jenny Ingram, language arts teacher.

In early October 2015, Ingram, a graduate of the class of 1998, was diagnosed with stage two invasive ductal carcinoma. In July of this year, breast cancer resurfaced as stage four.

â€œMy attending physician called [after my appointment] and she said, ‘Hey, is this a good time to talk?’ and I knew. I forget the adjectives she used; she said it sounded ‘awkward’ or whatever, â€she said. â€œThe scan showed activity in the lymph nodes in the lungs, then I had the bone scan and it showed tumors in the bones and that’s what really scared me. Apparently you have a better prognosis if it’s right in your bones as opposed to visceral organs like the liver or lungs. For me, it was seeing that it was in my bones that it was like “Oh my God”. What I thought were swollen lymph nodes were actually tumors. I was not one of those people who feared a recurrence. “

When his friends and family heard the news, they were shocked and upset.

â€œThe nightmarish scenario that it would someday come back as the fourth stage was something we all dreaded, so the fact that we’re going through this now is scary. What makes me feel good is that she’s so strong; nothing really knocks her down. It gives us strength. She is always smiling, she loves her job and she stays positive. It’s very easy to encourage her in this area, â€said Jessica Prosperi, Class of 2000 graduate and sister of Ingram.

Initially, when Ingram heard that her cancer was resurfacing, she was surprised because her blood tests over the past five years showed no signs of tumor growth.

Once a patient is done with chemotherapy, they usually go to regular six-month appointments to check for blood work and signs of resurfacing. In March 2021, Ingram had her last six-month date, which officially declared her five years “cancer free.”

Ingram found that being diagnosed in early summer was a blessing in giving her time to recover, but also often left her alone with her thoughts.

â€œWhen you’re first diagnosed with recurrence, it’s just a lot of doctor’s appointments. During the summer I could never sleep through the night and it’s not like I woke up and panicked, I was just awake. I think it’s because I had nothing to do during the day. But now that I’m back to work and have a routine, I sleep through the night, so that’s great. I’m not just at home thinking about things that might happen; I am back to work. I’m back to a normal life instead of sitting around and thinking about assumptions. Getting back to work has made a huge difference, â€she said.

Among other language arts courses, Ingram teaches Advanced Research and Presentation in Language Arts (ALARP). The class is unique to the Rockwood School District and consists of language arts honors coursework in addition to two semester-long research projects and presentations throughout the year. Freshman Cian Obrien is enrolled in Ingram’s ALARP I class and believes it provides an environment for its students to learn effectively but also to laugh.

“She is very pragmatic, but there are times when she likes to have fun with her students where she will put a meme or a joke in her presentation to make sure we are not too engrossed. [in the class] and always have fun, â€Obrien said. â€œIt promotes a sense of community. My whole class is very close to each other.

After a month of chemotherapy after his diagnosis in July, Ingram switched to a targeted therapy trial treatment. 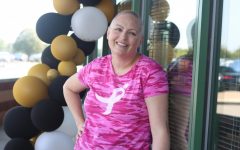 I think I can pull off bald; I like bald guys and you look a bit like a punk rocker. But then when you lose your eyebrows and eyelashes, you look like a cancer patient. “

â€œThe metaphor I created for cancer treatment is chemo, it’s a bit like the scorched earth approach. There is the scorched earth military tactic: when you attack the enemy, you burn everything, the good guys and the bad guys. You just destroy it all so that there is no potential harm there, â€Ingram said. â€œChemo wreaks havoc on your body. It kills bad cells and it kills good cells. The targeted therapy I am doing now targets the proteins and hormones that feed my cancer cells. I compare it to a sniper. They don’t go in and just burn, they just go in to kill a protein or just to kill a hormonal cell or a hormone. When I’m done [a month of chemo]I did not see any changes in the tumors or in the bones, lungs and lymph nodes. But after eight weeks of these two trial drugs, I had a significant decrease in tumor size.

Ingram found that with this targeted therapy, she had a different experience than her initial diagnosis and treatment.

â€œI was originally diagnosed in October 2016, and the first chemo I had was a real heavy hitter. I felt like crap in December. Between October and December, it was like real hard-hit chemo because they want to go and just hit hard. I remember one day in December I was helping the students revise for the final exam, and I was so tired of going back to work that I had to sit in my chair. I was out of breath. And then we went through a little review sheet, and I was so breathless just talking. That night I just lay in bed and I was so tired. I have never felt so tired in my whole life, â€she said.

During her initial treatment, she actually felt much better as she started to look psychically worse.

â€œIn movies and TV shows, chemo patients were sick all the time and vomiting. I haven’t been through this. By the time I started the chemo round from January to March, it wasn’t as hard on my system so things got a bit better. I looked worse because I had no hair. I think I can pull off bald; I like bald guys and you look a bit like a punk rocker. But then when you lose your eyebrows and eyelashes, you look like a cancer patient. I looked really sick even though I was feeling better. My fingernails turned yellow and brittle. They never fell out, but I dropped the majority of my big nail, â€she said.

During her treatment this summer, Ingram completed a month of chemo before starting her targeted therapy for her hormone-based cancer.

â€œAnyone can go online and look at the chances of survival for stage four cancer. I have a 72% chance of dying within five years, but the drugs I’m taking right now weren’t even there when these stats came out. When I talk about it, I get emotional. For the most part, though, I really don’t care, â€Ingram said.