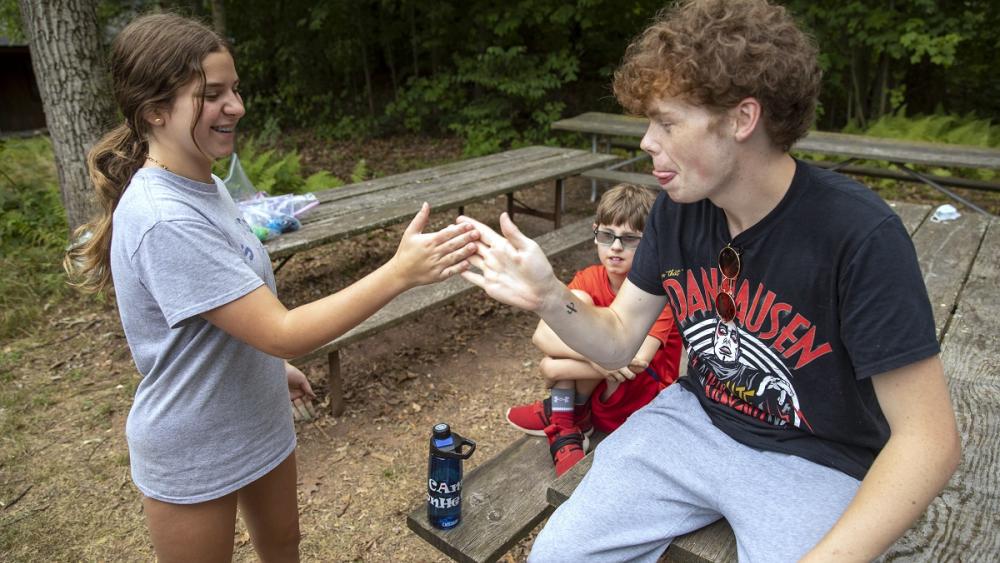 “It’s literally the first time he’s done this,” Rhoads says, pointing to H, a thin boy with tangled black hair sticking out from under his helmet, as he pushes his way through. Plastic handles made to look like stones on a rock wall are scattered on the wooden wall. Climbers are assisted by a person on the ground, a second, who uses their body weight to hold a rope tied around the climbers waist that keeps them in the air. Right now, H’s second is almost entirely supporting him.

“I think Kaeden is the reason most people get to the top,” someone says.

“It’s because I encourage people,” mutters Rhoads. “That’s what you have to do.”

Rhoads has found ways to reach just about everyone. Bush is an athlete – no problem involving him in sports, but with arts and crafts you have to cajole. There’s Ethan Alves, a kid who seems constantly surrounded by laughter. He is a fan of the band 21 Pilots―just like Rhoads―and the two formed a bond over it.

When Alves was born, doctors discovered that the two main arteries leading from his heart had been reversed.

At the base of the tower, Rhoads raises his gravelly voice towards H, who hesitantly fiddles with the wooden upright with a sneaker. “You have this. There is something near your left leg that you can stand on.

H runs. He puts one foot on one of the handles and climbs up the wall. Her sneakers disappear atop the tower, with Jaxin right behind it.

Councilor Carl Thompson, 18, is among those cheering. As a camper, he only climbed the tower once in four years. Like Rhoads, this is his first season as an adviser. Thompson was born with hypoplastic left heart syndrome, a severe defect that prevented oxygenated blood from pumping through his aorta. “You take your life in your hands,” he says of the wall. “You could never get me to climb that thing.”

Thompson looks up at the tower. “I don’t have a helmet, mate,” he said after a moment.

“Get a helmet,” says Rhoads.

Then H descends the tower on the zipline, eyes wide, mouth open in a silent scream.

As the climbers scale the wall, Dr. Thomas Chin, former chief of pediatric cardiology at Penn State Health Children’s Hospital, arrives to watch. Camp founder Chin knows all the stories. He stays at camp for much of the week, with emergency medicine specialists from Life Lion EMS. Other patients and healthcare workers come to teach and volunteer. Nearby, automated external defibrillators are ready.

They never needed to save a camper’s life, Chin said. They’ve had 119 campers so far in six years, he says.

Everyone attends for free. An organization called Ellie’s Heart Foundation pays for it all through donations from organizations like Children’s Miracle Network and private donations. It is named after Eleanor Ayers, who died of dilated cardiomyopathy in 2012 when she was just over eight months old. Chin told Eleanor’s mother, Jennifer, about his idea for camp, and she made it her mission to help him. Jennifer Ayers takes her family every year.

Every year everyone sits around the campfires to share their stories. Later in the day, they’ll be making dyed t-shirts (Alves, the 21 Pilots fan with an outgoing sense of humor, will be getting purple dye in his rust-colored hair, and everyone will be screaming), and cooking on an open fire. They will also speak with adult survivors of congenital heart defects and see a demonstration of an EKG machine.