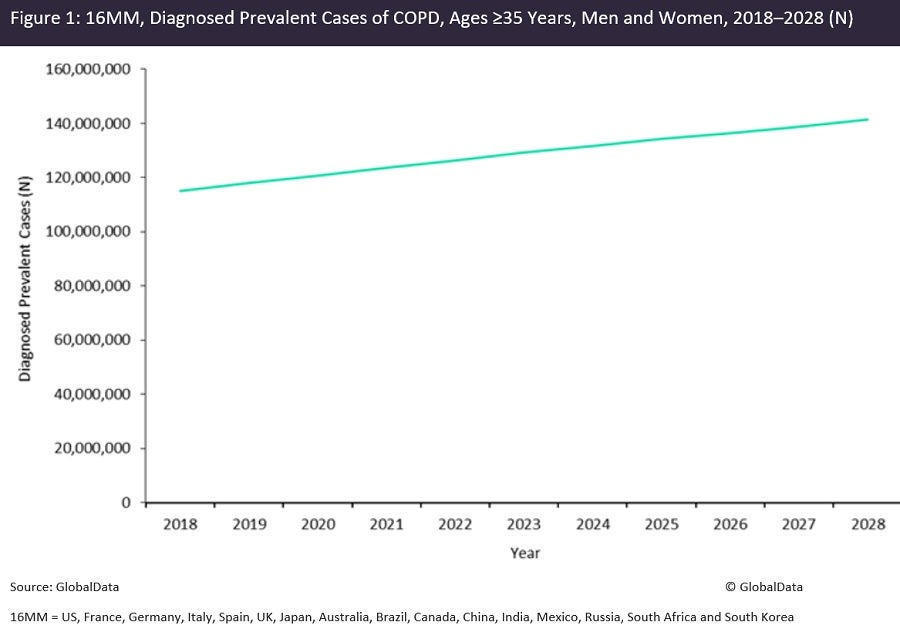 Chronic obstructive pulmonary disease (COPD), a group of diseases that cause airway blockage and breathing problems, is the third leading cause of death worldwide, surpassed only by ischemic heart disease and stroke. An estimated 90% of COPD-related deaths occur in low- and middle-income countries (LMICs), where spirometry, considered the gold standard for COPD diagnosis, is often not available. A study published this month, however, found that implementing a set of low-cost screening tools could greatly improve the diagnosis of COPD in LMICs. If such screening methods are widely deployed, GlobalData epidemiologists expect that diagnosed prevalent cases of COPD will increase in the 16 major pharmaceutical markets (16MM, namely the United States, France, Germany, Italy, Spain, UK, Japan, Australia, Brazil, Canada, China, India, Mexico, Russia, South Africa and South Korea) as more and more people are diagnosed with COPD.

The study, conducted by Siddharthan and colleagues and published in JAMA, compared the accuracy of three questionnaires, sometimes coupled with a peak expiratory flow (PEF) assessment to test how fast a person can exhale, with the gold standard of spirometry for diagnosing COPD. More than 10,700 adults living in Nepal, Peru and Uganda have been screened using these tools. The authors found that COPD could be identified in eight minutes using one of three questionnaires, with or without PEF assessment. Additionally, 95% of the cases in the study had not been previously diagnosed with COPD.

In the 16MM, GlobalData epidemiologists expect the diagnosed prevalent cases of COPD in both men and women to exceed 141.5 million by 2028 (as shown in Figure 1). But if these simple, low-cost screening tools, including questionnaires and DEP, are widely implemented in LMICs, increased identification of COPD cases could lead to more prevalent cases being diagnosed than are currently expected.

In high-income countries such as the United States, long-term smoking causes lung damage that ultimately leads to COPD. But exposure to household biomass smoke, produced when burning wood and coal used for cooking and heating, is a major cause of COPD in low- and middle-income countries. Expanded screening in these countries is the first step in bringing relief to the many people with COPD symptoms who do not have an official diagnosis. Further work will be needed to determine if screening for COPD can be done in a feasible way in routine health facilities in LMICs.

Data, insights and analysis delivered to you
See all newsletters
By the Clinical Trials Arena team
Subscribe to our newsletters