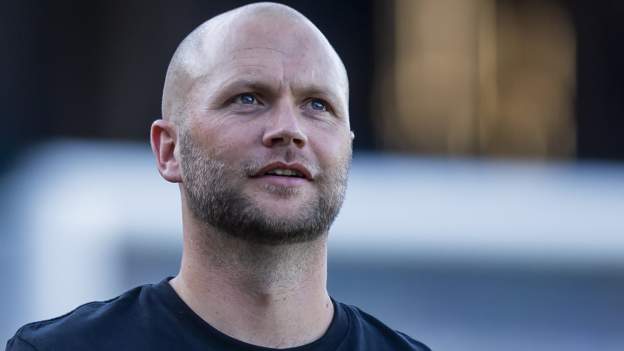 Newport County boss James Rowberry said he was ‘probably very lucky to be here’ after undergoing heart surgery on the eve of the League Two season.

The 37-year-old said he had a pacemaker after being diagnosed with third-degree atrioventricular. (AV) heart block, a life-threatening condition.

The condition was spotted after a routine check by the League Managers’ Association (LMA).

“I had to have a pacemaker installed to keep me alive,” Rowberry said.

“I’m probably really lucky to be here in a lot of ways.”

AV heart block occurs when the electrical impulses that control the beating of the heart muscle are disrupted. Symptoms may include shortness of breath, palpitations, dizziness and nausea.

Third-degree heart block can cause a wide range of symptoms, some of which are life-threatening.

Rowberry said: “It was a shock because it is found in sports hearts. It was something that came as a surprise and a shock to me and my family.

“I only told the players about it a few days before the operation.

“If I wasn’t a manager I wouldn’t know I had this, so I’m really lucky to be where I am.

“If you don’t know, you can just go into cardiac arrest.”

Rowberry is aware he is not alone in the footballing world with a heart condition, citing high-profile examples such as Dutch Ajax midfielder Daley Blind, the ex-Bolton star Fabrice Muamba and the Dane Christian Eriksen.

“I don’t know the full extent of it, but Daley Blind has a pacemaker – look at Christian Eriksen, Fabrice Muamba and [there are] others who died of cardiac arrest,” he said.

“With what I have equipped, I am [now] in the safest place possible.”

The LMA offers regular medical testing for its members and Rowberry paid tribute to the program run by the umbrella organization for club managers.

“You only get them (the tests) when you become a manager,” he added.

“I’ve taken exams before, but this is totally new. I’ll be forever grateful to the LMA – if it wasn’t for them, who knows?”

Rowberry said he felt “awful” for a few weeks after the operation, but thanked the club’s staff, players and board members for their support.

After following up the League Two win over Tranmere with an EFL Cup victory over Portsmouth in midweek, Rowberry felt it was the right time to reveal his diagnosis.

“It was a tough time for me, we got through it, we went to the other side and I want to give credit to the players and the staff for where we are.

“I’m not trying to talk about myself, but behind this I want to raise awareness as much as possible.

“It’s something that I feel is my responsibility now because of what happened to me.

“I’m the lucky one, I need to raise awareness of the different heart conditions and the charities available. It’s something we will do as a football club.”

The Exiles have seen two of their players retire from the game in recent seasons, due to heart issues.

Defender Fraser Franks retired in 2019, aged 28because of an irregular heartbeat.

Mark O’Brien, scorer of one of Newport’s most famous goals, retired at 27 because he needed heart surgery, having undergone a previous heart operation at the age of 16.

Newport travel to Harrogate in League Two on Saturday.