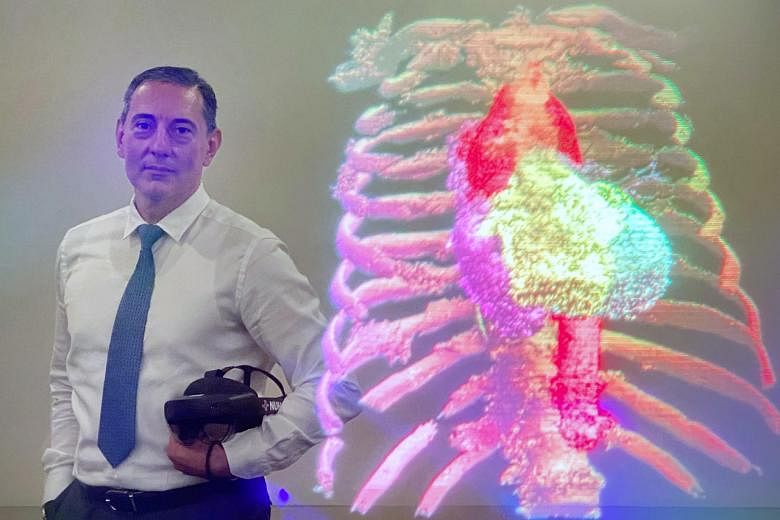 SINGAPORE – A sci-fi trope has come true with Singapore’s first holography-guided heart surgery successfully conducted by a team of surgeons from the National University Heart Center in Singapore (NUHCS).

Doctors, wearing holographic visors, could see a three-dimensional (3D) hologram of the patient’s heart, derived from a scanner and projected into space, giving them a colorful “x-ray” view of the anatomy and of the exact position of the internal organ. in space, as if they could peek through the chest wall, in real time.

The technology is primarily used as an aid to physicians to better plan surgery and anticipate potential difficulties, potentially reducing trauma and bleeding complications that could arise during surgery.

“(She) is particularly useful for patients with unusual anatomy, allowing us to get the best operative view and make the smallest cut possible. The technology allows us to know the exact location and angle to make the cut. ‘incision and cut the chest during the operation, as well as provide a guide during the initial part of the surgery as to whether the procedure is going to be simple or difficult, “said Associate Professor Theodoros Kofidis, who is the chief and consultant Principal of the Department of Cardiology, Thoracology and Vascular Surgery in NUHCS.

Professor Kofidis performed what would have been the world’s first minimally invasive holography-guided adult heart surgery at the end of October last year. Since then, four more patients have had this technology used for heart surgery.

So far, the National University Hospital (NUH) is the only hospital in Singapore with this technology. Some hospitals in countries like South Korea, Japan and China have also adopted this technology.

Surgeons can move, resize, and rotate the 3D hologram with simple gestures, as well as overlay the hologram on the patient’s chest during surgery.

The first patient was a 75-year-old man diagnosed with advanced aortic valve leakage, a condition that occurs when the heart’s aortic valve does not close tightly, resulting in backflow of blood.

The man’s heart was dilated and losing function and he needed valve replacement, which could be done with keyhole surgery.

â€œThis means that we planned a small incision – a completely endoscopic procedure – and therefore planned to work in a very confined spaceâ€¦ the HoloLens 2 helped me place my incision in exactly the right place, through the space between the ribs, and at the correct height on the chest, so I was exactly above the area where I had to work, â€said Prof Kofidis.

HoloLens 2 is a pair of smart mixed reality glasses from Microsoft through which the person can view the hologram.

“HoloLens 2 allowed me to assess the exact distance between the patient’s heart structures … These are structures where essential tools will enter,” he added.

2022-01-09
Previous Post: Congenital heart disease associated with pathogenic variants of the WAC gene: expanding the phenotypic and genotypic spectrum of DeSanto-Shinawi syndrome
Next Post: Family grieving as dad is diagnosed with devastating disease with no cure