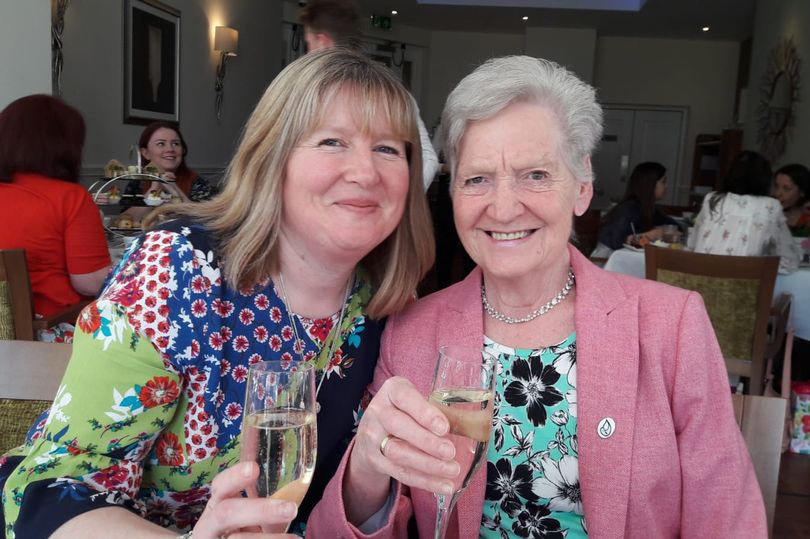 Grandmother diagnosed with terminal cancer by NHS ‘angels’ after being cured

A Surrey grandmother who was diagnosed with terminal cancer five years ago thanked her NHS ‘angels’ after being given a miraculous green light for the disease.When Evelyn Stone turned 76 last month, she and her family were able to deliver the most wonderful news imaginable.

Despite being diagnosed with end-stage bowel cancer in 2016, 62 grueling chemotherapy sessions later, the grandmother of two has defied all odds and is now completely free from the disease.

After receiving the good news, Evelyn made one final visit to St Luke’s Cancer Center based at the Royal Surrey NHS Foundation Trust in Guildford, to thank the staff and complete one final task.

Dressed in a superhero cape and mask, she rang the special St Luke’s bell to say “goodbye” to cancer.She said: â€œThe plaque near the bell says ‘Ring that bell three times well,’ but to be honest I couldn’t stop ringing it. I must have rung that bell about 50 times. there will never be enough words to thank the most amazing staff at St Luke’s. You are all angels and I thank you from the bottom of my heart. “

Evelyn was first diagnosed in 2012 and although her cancer was successfully treated in St Luke’s, it came back in full force in 2016.She heard the terrible news that she only had nine to twelve months to live.

Evelyn’s daughter Debbie said: “When mum was first diagnosed with cancer we were absolutely shocked. She had been in a lot of pain and had seen her GP, but we thought the problem was constipation. or diverticulitis Mom isn’t the type to complain and we didn’t think it was serious.“It wasn’t until she walked in one day and saw another doctor that the possibility that it was cancer was raised.

â€œIt all happened very quickly from that point on. Mom had many different tests and a colonoscopy and we found out that she had bowel cancer.

â€œMom was told she would need an operation because the tumor on her intestine was quite large and this continued into July 2012. She then had to recover before undergoing chemotherapy, which started three times. months later. After six rounds of chemotherapy she received the whole thing is clear. “In less than four years, Evelyn of Farnham fell ill again. She was told her cancer had come back and spread and this time she was facing a terminal diagnosis.â€œHearing this news was incredibly difficult, I really felt there was no hope for me,â€ said Evelyn. â€œBut I’m a very positive person and just tried to take it day to day which helped me cope. I kept telling my friends and family and myself – even there is still light at the end of the tunnel. “

She was offered palliative chemotherapy and started intravenous treatment every three weeks.She said: “All of the nurses and staff at Royal Surrey are absolutely wonderful, they are angels. I also received fantastic support from the staff at a local hospice, who were absolutely superb. They provide amazing service with advice, massages, manicures and all kinds of support. “Debbie said her mother was a “total inspiration”.â€œMom is amazing,â€ she said. â€œFrom 2016 to the start of lockdown, she had 62 grueling chemotherapy sessions. We call her a super mom because she never complains.â€

Evelyn said: â€œDuring the chemotherapy treatment and when Covid happened there were days when I wanted to give up. There were a few times I said ‘I can’t do this anymore’ but my kids Steven and Debbie just turned around and said, “Yes you can mom, you are strong. You can do it”.“It is because of my family that I have continued. My children, grandchildren and my family represent the world to me.”Since the start of 2020, Evelyn has received regular scans to check for the progress of the cancer. In early October, Debbie and Evelyn reunited as usual to hear the results of the most recent scan via a phone call from Royal Surrey.

A clerk told them there was no sign of cancer.â€œI was so stunned I couldn’t believe it,â€ Evelyn said. â€œIt’s absolutely amazing and it still doesn’t feel real, even weeks later. It’s just a miracle.“My consultant called me afterwards and explained to me that I was what they call a ‘great answering machine’ and that I had responded very well to the treatment, but she pointed out that it happened very, very rarely. She said I had done so well, but I said to her, ‘No, all of you have done so well for me, thank you very much.’ “

Sharadah Essapen, Consultant Clinical Oncologist, said, â€œEvelyn is an amazing woman who has been incredibly courageous and positive throughout her many years of treatment.â€œGetting rid of cancer after having received such a final diagnosis is a rare but wonderful event to be a part of. It is a very rewarding and uplifting time for everyone who has cared for her, including me. to Evelyn all the best. “