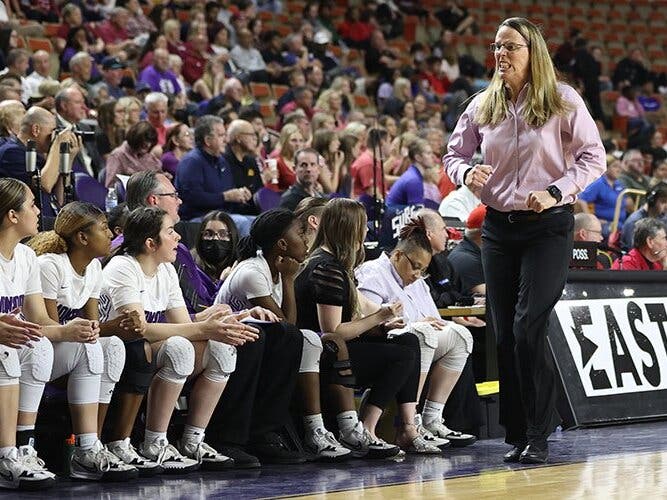 PHOENIX — During the 6A women’s basketball state championship game, Valley Vista coach Rachel Matakas paced the sideline, barked orders, and was locked in every aspect of the game. She seemed so at ease in her surroundings that few could have known of the hardships she had to face.

“It’s been a pretty tough year,” Matakas said of the leadership of Surprise High School. “But I’m blessed. I’m here, I’m upright and I thank God every day. Obviously there’s a reason I’m here, with what I’m doing and why I’m doing it.”

Last August, Matakas was diagnosed with cancer. The stress of the scary news led to a severe heart attack which sent Matakas to the hospital, where she was rushed for surgery. Her road to recovery kept her from being with her team at the start of the season.

A team-oriented coach, Matakas is actively involved with the players, often letting the managers speak mid-game while she takes a back seat. Because she instilled that independence in them, her players were able to stay on course as if each were part of a self-driving car built by Matakas.

“I was in constant contact with my coaches,” Matakas said. “I’ve been taught that it’s very good to let your coaches know what’s going on, to stay in constant communication, really because it’s very important to keep this ship moving.”

It’s one thing to have the instructions to succeed and another to have the mental toughness to execute in the face of adversity – both what they faced on the pitch and what Matakas faced off it. .

“We’ve had our moments, we’ve had our moments of ‘Oh my God, right? It’s not Matakas,’” assistant coach Zon Thompson said. “However, this team is so resilient, so supportive of each other. They just took it in stride, and it brought them together.”

And they did. Even without Matakas stalking the sideline and fiercely commanding the action, his players felt his presence, channeled his intensity and never missed a beat. Monsoon finished 16-2, produced blowout after blowout, and went undefeated to a single women’s basketball program at Arizona State.

Their only non-tournament losses came against the nation’s third-ranked team, Sierra Canyon (California) and Anchorage Christian (Alaska). Their season, which began under a cloud of doubt, became a clear mission to succeed for their fearless leader, Matakas.

Arizona Gatorade Player of the Year, Jennah Isai, a Top 40 Rookie by ESPN.com, kept the team focused on their mission to win. With or without Matakas, Isai was determined not to let her teammates go down the wrong path and to deconstruct Matakas’ solid framework.

“We’ve faced a lot of adversity throughout the year and the years past,” Isai said. “We always check in on Matakas, we’re always together, all the time, I think just being there for each other and supporting each other really got us through this.”

After clinching her third straight title and fifth title in six years, Matakas said she never doubted how things would turn out. Then again, she’s the type to always have a positive attitude. She didn’t let anything stop her from doing what she does best, coaching and winning.

“It’s going to be okay,” Matakas said. “I’ve always been a fighter all my life. Nothing has ever been easy, so that doesn’t surprise me.”