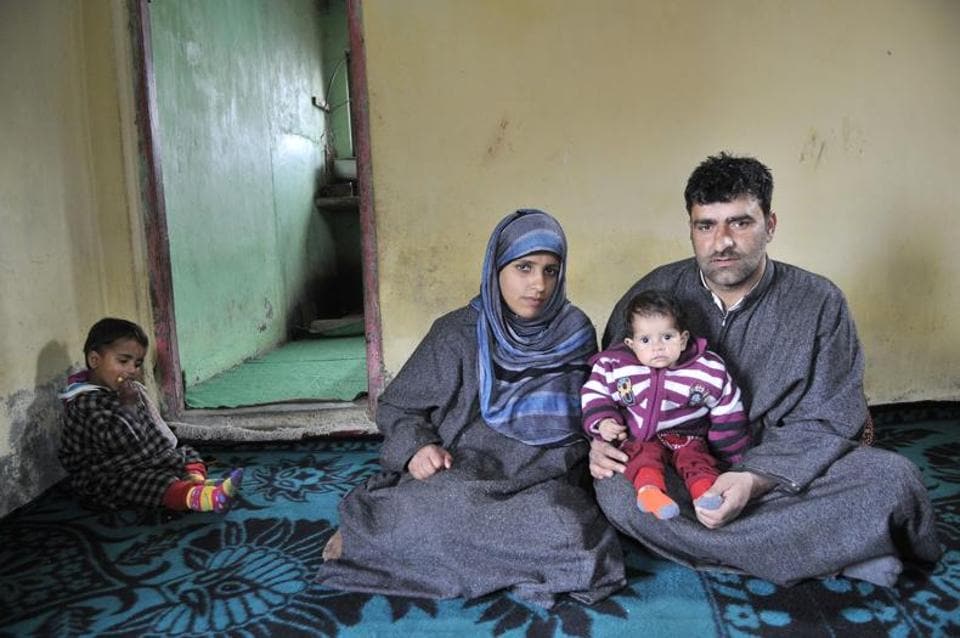 It’s heartbreaking to watch one-year-old Ayat Imtiyaz giggle on her mother’s lap in their home in a village in northern Kashmir while her mother unsmilingly watches her play. Unlike her baby, she knows that the large hole in her daughter’s heart threatens her life if it is not surgically repaired very quickly.

“If the heart operation is not done, my daughter will not live. Surgery can help her lead a normal life,” says Ayat’s father, Imtiyaz Ahmed Rah, 36, who took her to GB Pant Children’s Hospital in Srinagar for treatment.

“Ayat has a big hole in her heart that needs to be closed ASAP,” said the hospital’s pediatric cardiologist, who declined to be named as she is not authorized to speak to the media. “She’s already a year old and if she doesn’t have surgery before she’s two, her chances of survival will drop drastically. We can’t afford to wait.

Ayat’s father, Rah, who makes small wooden products for a living and earns Rs 7,000 a month, knows this but does not have the Rs 3 lakh needed for his daughter’s operation.

The couple, who married in 2012, lost their first baby to Down syndrome three months after birth. They now have two children, their son Fazil, born in December 2015, and Ayat, born on March 21.

Eight babies per 1,000 live births are born with a heart defect, but only three are critical enough to require corrective surgery. In most cases, the diagnosis is late and almost 40% of children with congenital heart defects arrive at surgeons at a critical stage.

Corrective surgery within a year of birth can help children with heart defects lead normal lives.

“Once operated, the children lead completely normal lives. The operation has a success rate of 97%. However, most children in India do not arrive on time due to lack of awareness and lack of funds,” said Dr. Kulbhushan S Dagar, Director, Neonatal and Congenital Cardiac Surgery, Max Healthcare, who also treats a child who hasn’t had surgery because his parents can’t afford it.

Manish Kumar turns 4 on April 4, but he’s too sick to celebrate. Manish has a congenital heart defect which makes even the slightest movement exhausting for him. He becomes short of breath and collapses after taking a few steps and has difficulty eating, leading to his undereating.

He’s a virtual prisoner in his little body – he can’t play, doesn’t go to school and has no friends.

Surgery to correct his heart defect within six months to a year after birth could have helped Manish lead a normal life, but his parents did not have the Rs 3 lakh needed for the surgery. And that is unlikely to happen anytime soon, as his parents earn around Rs 3,000 a month working as daily bets in a village 15 km from Aligarh.

Delaying the surgery puts Manish at a very high risk of suffering a stroke that can kill him. “We can’t really say how long he can survive with a bad heart. His heart is stressed and any delay in surgery will make recovery fraught with challenges,” says Dr Dagar.

1.7 million are born with birth defects each year

2,000 children are born with congenital heart defects every year

60% of children have surgery on time

Lack of awareness, socio-economic conditions and lack of adequate funds are some of the reasons behind the delay of surgery

Manish has a double outlet right ventricle (DORV) and ventricular septal defect (VSD) with pulmonary stenosis, commonly known as a hole in the heart, as well as other heart abnormalities that cause oxygenated and deoxygenated blood to mix. The narrowed blood vessels also prevent blood from reaching his lungs for purification.

“He had low birth weight and developed pneumonia when he was six months old. The doctor in our village could not treat him, so we took him to the doctors in town, who diagnosed him a hole in his heart and recommended early surgery,” says Vijay Kumar, Manish’s father, who is in Delhi for his son’s treatment with the help of the Delhi-based NGO Genesis Foundation, which helps children with heart defects get treatment.

The challenges remain. The waiting period is often very long in public hospitals, while treatment in private hospitals is something poor parents cannot afford.

The wait for pediatric heart surgeries at the All India Institute of Medical Sciences (AIIMS) in Delhi lasts for years even when 12 to 15 surgeries to treat congenital heart defects are performed every day.

“We not only treat patients from India but also from other countries, which makes the waiting period long. We prioritize surgeries based on the urgency of the case,” said Dr. AK Bisoi, Professor, Department of Cardiothoracic Surgery, AIIMS.

Help Ayat Imtiyaz and Manish Kumar
If you would like to help pay for surgeries, send a check made out to Genesis Foundation http://genesis-foundation.net/ (registered under Sections 12A and 80G of the Income Tax Act, which entitles 50% tax exemption). For online payment: IDBI Bank; Account number: 038104000103206; IFSC code: IBKL0000038.

“These abnormalities can be diagnosed through a scan called a fetal echo. All pregnant women should ideally have a scan under the supervision of a cardiologist between the 16th and 20th week, especially for those with a family history” , said Dr. Bisoi.

2017-03-26
Previous Post: Parents of children with severe heart defects may be at risk for PTSD
Next Post: Congenital heart defects: more people are surviving thanks to better diagnosis and better treatment