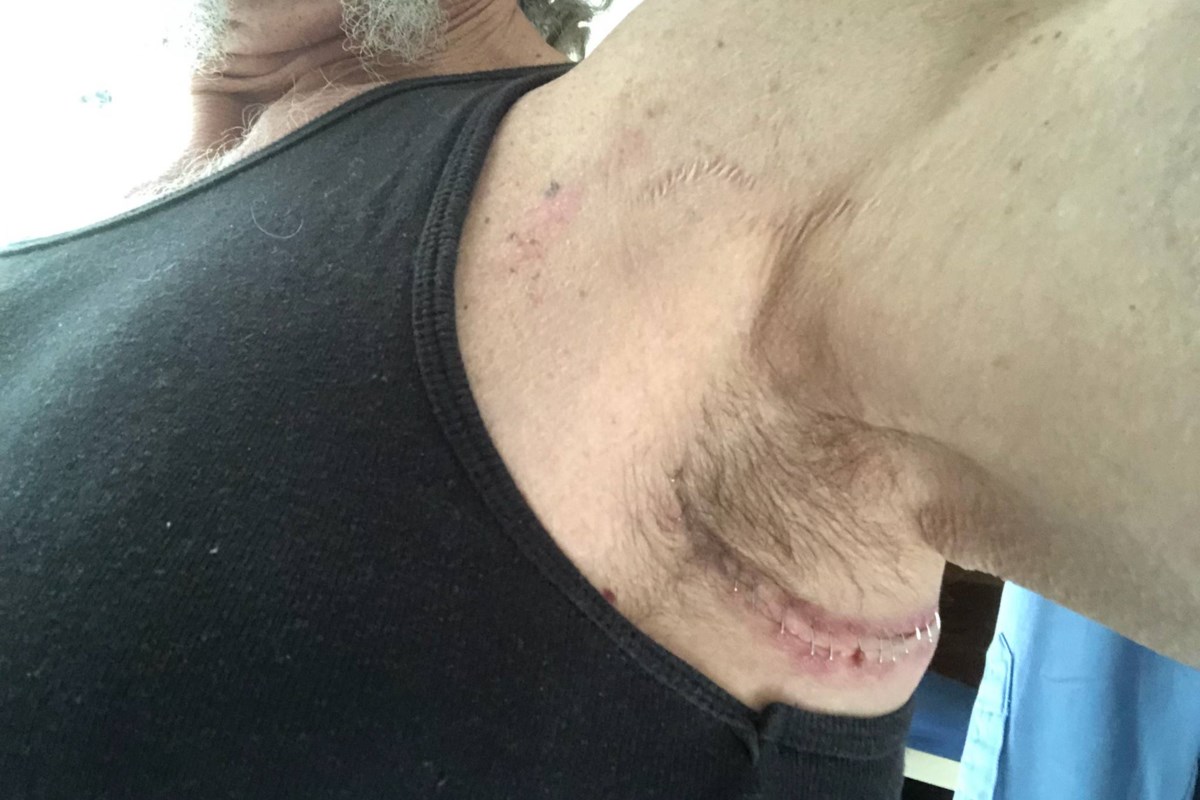 CHRONICLE: The diagnosis of melanoma is a dramatic alarm signal

A menacing mole put the columnist on a rollercoaster ride, prompting him to tell his story to encourage others not to ignore potentially worrying signs

“You are talking to me?”

Unlikely, but not unreasonable.

It took me the rest of the 1970s and most of the 80s to watch it in its entirety, capturing it in multiple snippets, previews, and late-night looks; in, after late evenings.

While shaving last winter, I smiled thinking about this sensational clip. We get strange mirror images, from random reflections off strange windows, when the sun is so bright. The guy staring at me looks about my age; there is a certain resemblance, but, he must be older, with much less hair which is much whiter, he has fat where I don’t.

One day in early December, when the sun shines as such, here he is again. Wow! What is this horrible growth on the collarbone? Large circumference, and by God, it grows; at New Year’s, it’s downright “3D”.

Feigning indifference, with a casual wave of my lather-filled razor, I told him, “Better get that thing checked out.” He looks quickly up, down, even faster. “Never mind,” I mumble. “While you’re at it, put some curtains up,” as we simultaneously turn away, closing our blinds at the same time.

Fortunately, this menacing mole, much like De Niro’s, is right under his nose.

A few weeks later there is an appointment to go over some blood tests related to cholesterol. Dr. D had announced a year earlier: “You will be taking rosuvastatin for the rest of your life”, measuring my mortality far too simply.

When I mentioned the mole, that it was bleeding, that it had fallen off, she raised an eyebrow, finding another, 15 seconds later, on my back, that I would never have.

“This one has to go. He will be biopsied. We will book you here and in Barrie. There have been a few cancellations. Take whichever comes first, maybe both. “

We had gone out on a Monday in March, having chaperoned the occasion of an acquaintance with an oncologist, agreeing that he was indeed a wonderful man, but that it was not a long-term relationship she should aspire to. . This, especially after a litany of indeterminate results, despite a jackhammer-like instrument to extract a bone sample. “The most painful experience ever,” she said.

While joking that “Dr. Coleman once gave me two needles in the roof of my mouth,” to no one in particular, I took note that not everyone was impressed. Typically, levity is uplifting occasionally this is not the case.

Left alone afterwards, I savored a frothy sip, at the hi-top table of a restaurant, in the sun. A red flash on my phone signaled a few missed calls. Hmm, doctor’s office, and a message from the chief medical officer herself; always practical, down to earth and to the point. Now, however, there is a hint of alarm, an urgency, even a hint of interrupted speech.

The same message on the answering machine at home, I delete it. Why add angst to an already copious plate?

I followed up with Dr D the next day.

“Not a good diagnosis…malignant melanoma…skin cancer which can be fatal…but the pathology is good, not extended to the margins of the excision…but insufficient amount of skin tissue. biopsy to rule out any spread…not good news, we might need some scans,” the doctor said.

“We need to get you in right away.”

I picked up as many at the previous night’s foamy draft – two calls, caller’s caliber – the stewardess glance test, for the true measure of turbulence. Insiders aware.

There is an appointment to discuss the pathology. “If the melanoma is in the lymph nodes…we go to oncology.”

I ask him, “Should I renew the Rosuvastatin?”

Around the same time, you might recall the Seattle medical student bringing to his attention the matter of a suspicious mole on the back of Vancouver Canucks coach Brian Hamilton’s neck. She spotted him while sitting behind the bench in Vancouver. Hamilton’s doctor informed him that if he had ignored the warning, four or five years later he wouldn’t be here.

With any mention of moles, I always remember former Toronto Maple Leaf Darryl Sittler, arguably the tallest on the team, seemingly suddenly appearing between periods of a Hockey Night in Canada aired in the mid-80s, as if it was a last minute decision.

With an odd mixture of hesitation, but also seriousness, he spoke of his near-miss with melanoma, expressing cause for concern with conviction.

The Sittlers are dedicated advocates for cancer prevention. They were hit hard; their message is powerful. Darryl’s wife, Wendy, who has been diagnosed with preventable cancer, spoke emphatically about the devastation of the disease, the ravages of chemo and radiation, imploring everyone to be aware, to get tested.

They were seasonal customers, when suddenly, one summer, Wendy wasn’t.

In late April, I was scheduled to undergo a sentinel lymph node (SLN) biopsy, a procedure that injects radioactive dye around the primary tumor, before a large local excision removes it.

The gamma-ray scan then maps the route of the dye along the lymphatic vessels to the lymph nodes, three of which needed to be excised for a biopsy.

“Your melanoma is a ‘T1B;’ the ‘T1’ belongs to the stage, and of modest thickness; the ‘B’ indicates a potentially aggressive ulceration, compared to that of an ‘A’.

Lying on the operating table, I’m ready for the dissection, introduced to a crowd of brief but friendly medical practitioners who are “all-business” to perform it. One of them asks me to count backwards from 10, while I count his colleagues.

Amidst the bustle of flashing fluorescent lights on clanking stainless steel, there are needles, tubes, tape, and conversations. I have a millisecond for melancholy, gushing, wondering who will take care of my young screaming Lab, the Haze, when the anesthetic kicks in.

I numbered them seven; there were maybe eight.

It was a mole after all.

I woke up with two new tattoos, with no input as to their design or purpose. The one on my back is rather rudimentary, a centipede with only 15 pairs of legs, but the second one is spectacular – the macabre smile of a jackal, sporting staples, eerily like incisors, blood dripping from them later during the day ! Why it’s hidden under my arm, no one has said.

Two weeks later, the LNS results came back negative, which I consider positive, given Dr. D’s upbeat mood. “The melanoma hasn’t spread,” she enthuses, while removing two more moles, fixed on four others for future excision. “We got it.”

When I tentatively speak to a column about this experience, she encourages, “skin sensitive,” as she calls it, by providing me with a copy of Melanoma: beyond the basics. It’s riddled with nastiness and repercussions, “…immunotherapy…unleashing the body’s immune system to reject melanoma…attacks other body tissues…life-threatening side effects…inflammation of the heart, lungs; thyroid, liver, kidneys… Melanoma frequently spreads to the brain… Radiosurgery irradiates the tumor… damages normal brain cells…”

Nothing really exciting or too disturbing.

I skip the sections on “investigational drugs” and “participation in clinical trials”. They are just ahead of “end-of-life care”.

It is a more demanding piece, reworked and rewritten, almost canceled, for a nervousness according to the non-qualification appearing as offensive and delinquent.

… I had stopped at the funeral home to pay my respects. It was the shiny and vibrant dress that first caught my attention. She smiled warmly despite the circumstances, showing him warmly under her bald crown, as she came across people she hadn’t seen in decades, even though they were from the city.

There were tubes going to her or coming from her, maybe both, and a visible wound under some sort of plastic patch. Her approach was slow, weary and loaded, but she hugged these friends a little longer and tighter, perhaps wondering when she would see them again…

Traces of apprehension remain with me, the melanoma might reoccur to migrate and meander, but all in all it was a brief 50 day battle. I had envisioned a trek with more turbulence, an enlightened insider piece, maybe even a series, qualified by first-hand experience.

I am the fifth such patient that Dr. D is currently treating. She senses my apprehension, leans forward and frowns, “John, you’re qualified,” and I smile to myself as she returns to her endearing, practical, down-to-earth demeanor. “We will schedule full body checks, every three months,” she says with a north-south gaze as I grimace from east to west.

And, during those 50 days, I may not be qualified. If so, it is thanks to the blessed and diligent heart of Dr. D. who provides health care.

And also for the segment from a long time ago by Sittler, without which I might have dismissed this.

I don’t have his celebrity or stature or stage, but I hope for a similar effect, maybe here, from this page. In Sittler’s own words, “Not knowing is not the answer. You don’t have to be Darryl Sittler to tell the difference.

There’s a lot of old movies I’d like to see, but, Taxi driver going to be the first. From start to finish, without interruption, all in one session.

“You are talking to me?”

John Epstein is a 25-year-old former business owner from Orillia who moved north from southern Ontario years ago and never returned. He is now a freelance writer, columning monthly in OrilliaMatters. He can be reached at [email protected]