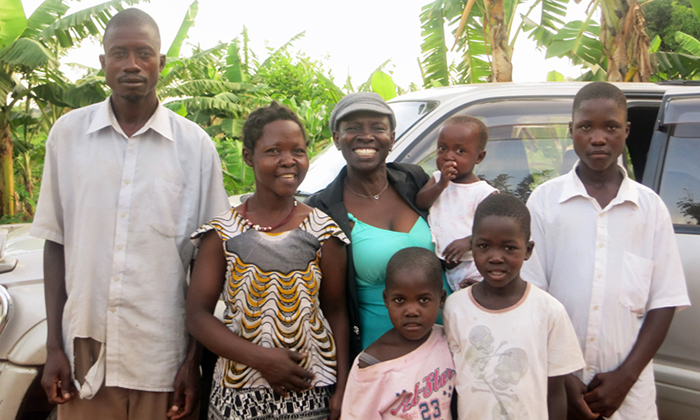 Children’s Heart Project organized a life-saving operation for Alice (the youngest child in the picture), who is one of many children who live in countries like Uganda where the medical expertise/services and equipment needed to emergency heart surgery is not fully available or affordable. COURTESY PHOTO.

The project has been running in Uganda since 2003, led by Franklin Graham, the eldest son of Billy and Ruth Bell Graham.

According to a statement, the organization identifies children with life-threatening heart conditions and connects them with North American hospitals and surgeons who volunteer their time and services.

Children’s Heart Project provides airfare for the child, a parent and translator, and organizes churches and foster homes across the United States to provide loving care while the child recovers in their partner hospitals after surgery.

In a recent report, Samaritan’s Purse quoted three-year-old Alice Nakolo from eastern Uganda, who had surgery as part of its Children’s Heart project. Her family believed in witchcraft and often visited witch doctors to seek health, healing and luck, as many people in her village did not know the one true God.

Alice’s father identified only as Nyende (far right) did nothing for her, leaving the rest of the family to find out what was wrong with her on their own. Alice’s mother, Rebecca, was referred by friends to witches and herbalists for medicine, but it didn’t help.

Eventually, she was referred to the main referral hospital in Kampala, the Ugandan capital. Alice and her mother had never been exposed to the city, so traveling to Kampala was a bit overwhelming. Throughout the long and tiring journey, Rebecca couldn’t help but imagine that Alice was going to die. At the hospital, Alice was diagnosed with a congenital heart defect. With her meager resources, Rebecca didn’t think she could do anything else for her daughter.

“I traveled in the cold night on the bus, I slept on the hospital floor when I had a doctor’s appointment the next day or when Alice got sick,” she said. . Samaritan’s Purse. “There is nowhere I have not gone or anything in my power that I have not done for my daughter to recover. But it didn’t all work out. »

Then the hospital introduced Rebecca to Samaritan’s Purse. When she met the staff members working on the Children’s Heart Project, her face fell with worry, weariness and sadness. She didn’t know what to expect, but the team stood by her in prayer and support. Thanks to our Children’s Heart Project, Alice was put on a waiting list and then agreed to have surgery in North America.

Cardiovascular disease (CVD) accounts for 10% of all deaths in Uganda, making it the most common non-communicable cause of death, sources say.

Media reports show that people in Uganda with financial capacity usually travel abroad, mostly to India, to treat cardiac complications, while 478 out of a possible 1,000 lucky patients are operated on at UHI, according to official statistics.

Just over a month after Alice’s surgery abroad, her family welcomed her home. Samaritan’s Purse reports that Rebecca takes good care of her children.

“I didn’t feel at peace when I left my family,” he reportedly said. “I had to go home and ask my wife to forgive me. I felt like I didn’t deserve to be forgiven, but I was surprised that Rebecca welcomed me home and forgave me. Now I am a changed man. I no longer drink alcohol and I thank God for changing me.

Rebecca said she forgave Nyende because she knew God would do the same. Since he moved, they are expecting another child.

Samaritan’s Purse continued to visit Alice’s village after the operation. 19 people came to Christ as a result. These residents now have Bibles to further their spiritual growth.

“Indeed, God exists, and he is a God of wonders. As a family, we can now have other plans without fear of losing her. We have indeed been released,” she added.