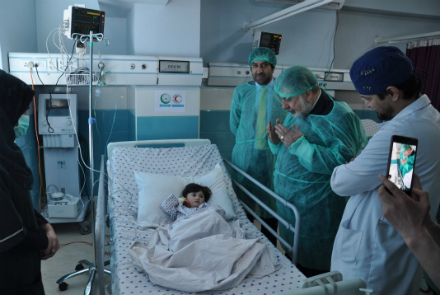 The project will offer surgery as a treatment option, according to an ARCS statement.

ARCS claims to be the only humanitarian institution in the country to provide “free referral and treatment services for coronary heart disease”, and its statement says that ARCS will continue to “expand its network of resources and get closer to hospitals inside and outside the country”.

According to the release, ARCS is seeking funding for equipment over the next three years, so that it can run its own CHD hospital in Kabul as the only organization providing surgical treatment to the CHD population in the country. says the press release.

The ARCS CHD hospital will be equipped with “modern surgical treatment facilities” and “staffed by competent local hospital staff who will “provide the highest quality surgical care for coronary heart disease”.

Running the ARCS CHD Complex Hospital will save the financial resources of ARCS, which is currently referring coronary artery disease patients out of the country for surgical treatment, according to the statement.

Patients who are confirmed cases of coronary artery disease and require surgery (determined by echocardiography in hospitals nationwide), especially those from low-income families in the 34 provinces, will be the direct beneficiaries of the project, according to the release. .

This was the second phase of a project sponsored by the B&R Fraternity Fund, which aims to help a total of 150 children with heart disease in Afghanistan.

Newly arrived children will be treated at the First Affiliated Hospital of Xinjiang Medical University.

24 children in July 2019 were treated in Xinjiang and returned to Afghanistan on August 14.

The project has already treated 100 Afghan children from August 2017 to October 2018 in the first phase.

According to the Afghan Red Crescent Society, the lack of specialized hospital services for cardiac patients, especially patients with congenital heart defect (CHD), has caused ARCS to respond to the treatment of this affected population.

Based on ARCS statistics, the increase in the number of CAD patients and the limitation of hospitals providing CAD services to ARCS patients have increased the waiting time, and death rate of children with coronary artery disease during the waiting time reaches 10-15%.