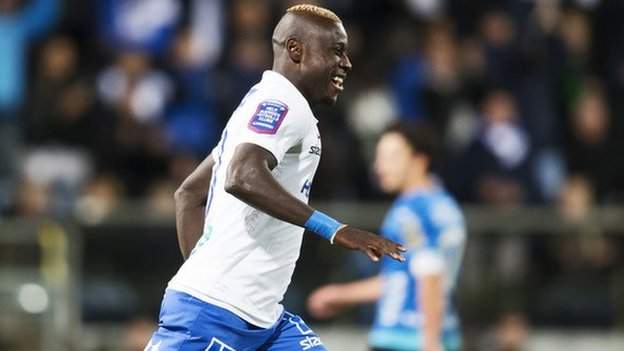 Alhaji Kamara: Sierra Leonean has ‘more to give’ after defying heart diagnosis

Sierra Leonean free agent Alhaji Kamara, who has defied a medical diagnosis potentially ending his career to continue playing football, says he has “more to give to the game”.

In 2016, medics said the forward had a heart defect while at Swedish club Norrkoping, a finding that briefly interrupted his career.

The issue was detected after undergoing a mandatory UEFA medical examination before IFK Norrkoping’s participation in the European Champions League qualifiers.

The 24-year-old had just won the 2015 Swedish championship title with NorrkÃ¶ping.

He was advised not to participate in high performance football for the foreseeable future as his heart defect was unusual and carried a high risk of “sudden death on maximum effort”.

After further testing in the United States later in 2016, he obtained a medical clearance to resume his career and was signed by MLS DC United club.

He went on to play for the United States second division team, the Richmond Kickers, Al-Taawoun in Saudi Arabia and FC Sheriff in Moldova, where he made the qualifiers for the UEFA Champions League and the Europa League.

Kamara is currently a free agent after leaving FC Sheriff, where he has scored nine goals in 14 league appearances and he insists he is in good health.

“I always think I have more time in the game,” Kamara told BBC Sport.

“I was cleared to play in Europe because I played this season in the preliminary stages of the UEFA Champions League and Europa League qualifiers with FC Sheriff.”

Kamara admitted it was difficult for him when told about his heart disease, but never considered quitting gambling – even though friends advised him to stop.

“It was shocking, I was not feeling well but with the help of God, with hard work, with a lot of faith and with the support of my family and friends, I was able to overcome the situation”, he explained.

â€œI never considered quitting football. My friends expressed their concern after hearing the news and they took pity on me.

“But I tried to be positive. Some people asked me to stop playing, but I encouraged them to believe that I would be safe to resume playing.”

He’s looking for a new club, and as he recovers from hernia surgery, he says he’s not interested in returning to Sweden.

“For now, I am not planning to play in Sweden again because I cannot change the perception of my situation,” he continued.

“I put it all behind me. Now I’m a free agent and I talk to clubs. I have no problem playing in Europe or elsewhere.

â€œI’m working on my fitness because I had surgery in November, but I’m doing better. I’m back to racing.

“So I talk to the clubs and make it clear to them about my operation – I will start playing again very soon.”

Kamara has not played for Sierra Leone since his heart problem was discovered. He was invited to join Sierra Leone for their qualification for the 2019 Africa Cup of Nations against Kenya in Freetown in June 2017,

At the time, he said his then club – DC United – insisted on having a defibrillator in the stadium as a precaution.

But the Sierra Leone FA (SLFA) said they could not afford to guarantee him prompt and professional medical attention in the event of an incident on the pitch and as a result Kamara did not participate in qualifying.

â€œThe defibrillator is a precautionary measure for every player on the pitch,â€ Kamara said reflecting on the events of 2017.

â€œDC United always knew whether I was playing or not because they saw crashes on the pitch a couple of times.

2019-01-19
Previous Post: Here’s how heart disease affects men and women differently. Find out if you are at risk | Health
Next Post: Climate change could increase congenital heart defects