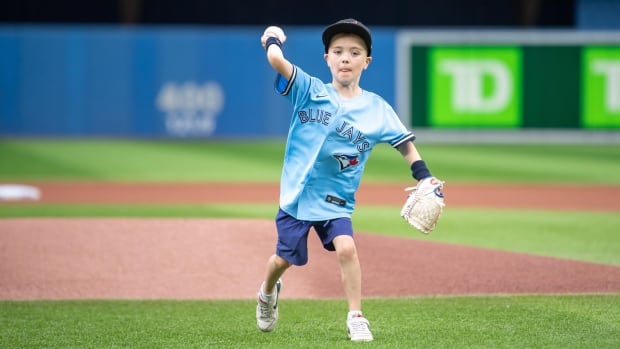 A young Saskatchewan resident with a rare heart condition was recently selected to throw out the first pitch at a Toronto Blue Jays game.

Rocky Trainor threw the first pitch — a lifelong dream for the seven-year-old from Saskatoon — before the Jays face the Baltimore Orioles at Rogers Center on Tuesday.

The condition limits blood flow in his heart.

“When he was born, he was airlifted about two days after he was born for his first open-heart surgery at about three or four days old,” Scott said.

Rocky has since had two more open-heart surgeries.

The Make-A-Wish Foundation, which grants wishes to children with serious illnesses, made Rocky’s dream come true.

Scott said he first learned that Rocky would get his chance about two weeks ago. It gave him and Rocky — a first baseman with a Saskatoon team — time to do some reps by throwing the ball into their backyard.

Scott said it was pretty hard to keep things a secret and plan a few elements of the trip behind Rocky’s back.

Rocky learned he would be launching the land about a week ago when the Make-A-Wish Foundation visited and broke the news.

Scott said when it came time for Rocky to throw his pitch, the kid was pretty calm and nervous for about five minutes beforehand.

Scott said Rocky is normally quiet and shy – so he was a bit out of his element – but came out of his shell before the pitch. Scott said the crowd was a little too quiet for Rocky’s liking, so the boy held up his arms to fluff them up before his throw.

Rocky rolled up and threw a pitch wide to Blue Jays second baseman Cavan Biggio, but Scott was still impressed with how far his son covered.

“When he gave the speech, I might have thrown in some swear words to encourage him because I was pretty proud of him,” Scott said.

“People in Saskatoon, my phone went straight to, ‘I just saw Rocky on TV.’ [It was] quite surreal and it was pretty awesome. It brings tears to a guy’s eye.”

Rocky Trainor is a little shy, but you sure wouldn’t know that if you were watching Toronto Blue Jays games on Tuesday. Rocky threw the first pitch of the Jays game. It was a great pitch – and what he did before that had the crowd on their feet and buzzing. Guest host Peter Mills chats with Rocky’s father, Scott Trainor, to learn more about his son’s journey to the Rogers Center diamond.